This is my curriculum vitae, to browse or download according to your preference.
For a more detailed description of my experience please visit my Career Highlights page > 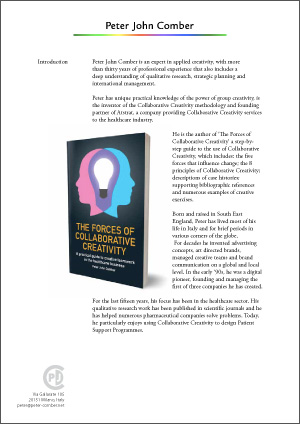 Peter John Comber is an expert in applied creativity, with more than thirty years of professional experience that also includes a deep understanding of qualitative research, strategic planning and international management.
He is the author of ‘The Forces of Collaborative Creativity’ a step-by-step guide to the use of Collaborative Creativity, which includes: the five forces that influence change; the eight principles of Collaborative Creativity; descriptions of case histories; supporting bibliographic references and numerous examples of creative exercises.
Born and raised in South East England, Peter has lived most of his life in Italy and for brief periods in various corners of the globe.
For the last fifteen years, his focus has been in the healthcare sector. His qualitative research work has been published in scientific journals and he has helped numerous pharmaceutical companies solve problems. Today, he particularly enjoys using Collaborative Creativity to design Patient Support Programmes.

Founder Partner and President of Atstrat

In 2003, Peter began a collaboration with GSW, a US based company and the largest independent pharmaceutical agency in the world. In June 2005, he founded an Italian company with inVentiv (holding company owner of GSW) and DWA, his employer, as partners. Responsible for startup organization, strategy and creativity. The agency grew rapidly and was wholly acquired by inVentiv in 2009.
Clients included: Novartis, Boiron, Eli Lilly, Johnson&Johnson.

His personal interest in the Internet became an area of professional growth, starting in 1995 when he created his first commercial web site, for sports goods brand Invicta. This early start led to many more opportunities and in January 2001 he founded Ottovolante, a web agency, with DWA as a partner. A succesful venture that produced many innovative digital projects, Ottovolante merged with another digital agency when Peter needed to dedicate himself exclusively to his demanding role at inVentiv Health.
Clients included: American Airlines, Ferrero Kinder Surprise, Huhtamaki and Versace.

His experience in DWA, over 21 years, covered multiple product categories and every kind of media. He coordinated and organized work teams and in some cases (especially international accounts where his language skills were an advantage) ran the account directly with the client. The following are a selection of particularly significant experiences:
Kinder Surprise - Six years of creation, prototyping and testing of characters and concept materials for the worldwide production of Kinder Surprise special series characters for Ferrero, through their MPG division.
Warsteiner - Five years of executive management of the Warsteiner beer account in Italy working directly with the client marketing department in Germany. Included media planning and buying (TV, radio and print), consumer promotions and special live events.
Sanpaolo IMI - Seven years of creation of advertising and product sales tools for many financial products of Sanpaolo IMI (now Intesa Sanpaolo bank).

Peter joined Benton&Bowles (that, while he was there, became DMB&B after merging with D’Arcy, McManus & Massius) and worked predominantly on FIAT automobile advertising and promotional materials, including dealership advertising.

His first experience in advertising, concentrating on graphic design and packaging.

English and Italian: Excellent, both spoken and written.

Complete and publish both the books that he is working on, a dramatic novel and a book on graphic design in collaboration with many of the world’s leading designers.
Learn to play guitar.